Accessibility of polling stations is at discretion of states, says European Court of Human Rights 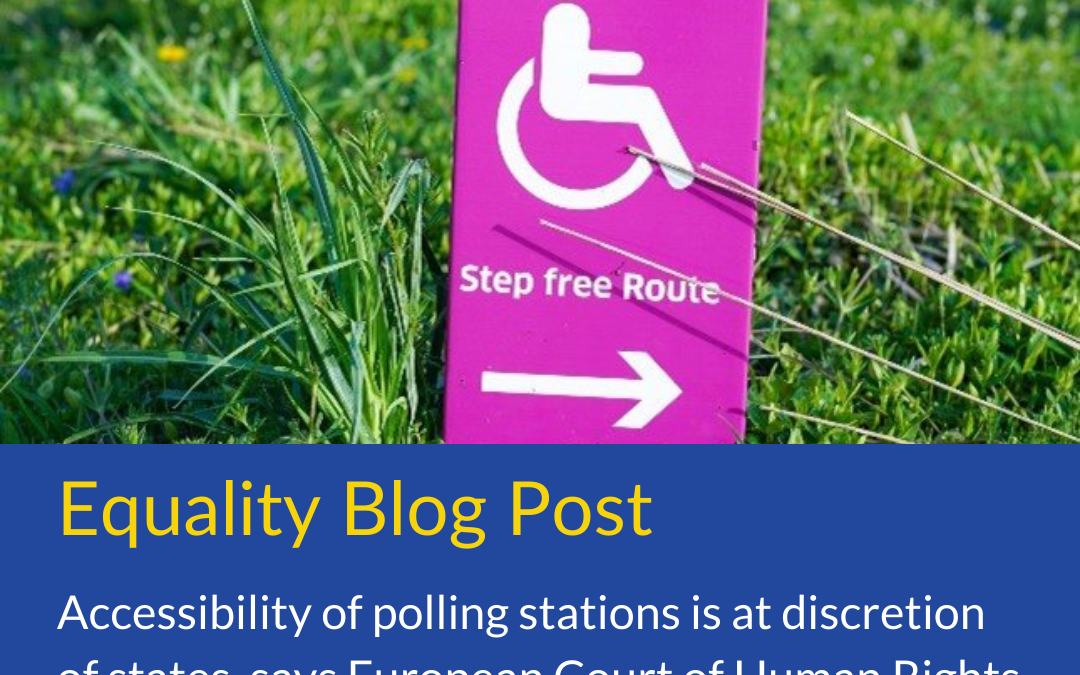 On 26 October 2021, the European Court of Human Rights (ECtHR) published the judgment for the case Toplak and Mrak v. Slovenia (applications nos. 34591/19 and 42545/19), concerning whether the lack of accessibility of polling stations is contrary to the European Convention on Human Rights (ECHR). Equinet was closely following the proceedings given that, for the first time, it submitted an amicus curiae brief to the ECtHR that is also referred to in the judgment. Although the applicants encountered  obstacles to cast their votes because of their disability during a number of elections, the Court arrived at the conclusion that they were not discriminated against. This post summarises the facts, the Court’s decision, and comments on the outcome.

Both applicants had muscular dystrophy and used electric wheelchairs for mobility. Their applications to the ECtHR concerned 2015 national referendum and 2019 elections to the European Parliament.

Before the referendum, both applicants informed the National Election Commission of their needs in order to vote independently at their local polling stations (ramp, access to the voting booth, voting table and ballot box). Mr. Toplak accessed the polling station autonomously via ramp. However, he claimed that the secrecy of his vote had been compromised due to the positioning of the furniture in the voting room which could not have been moved. Mr. Mrak, while he made use of the opportunity offered by a district election commission and made a trial visit to his polling station, prior to the voting, on the day of the referendum he had to wait outside of the polling station for a passer-by to help him up the ramp. He also claimed that the voting booth and ballot box had not been adjusted to his needs.

During the 2019 European Parliament elections Mr. Toplak claimed that while a ramp had been installed, the rest of the polling station had not been adjusted to his needs. Further, Mr. Toplak’s condition deteriorated at that time and consequently did not participate in the elections. He was no longer able to use a pen and did not wish to be assisted and thus reveal his vote to a third person.

It is also necessary to mention the national legislative and judicial framework on this issue because the ECtHR relied on it to a great extent. In 2014, the Slovenian Constitutional Court ruled that the legislature should, within two years, adopt legal provisions ensuring accessibility of all polling stations to people with disabilities. Within one year almost 50% of polling stations were physically accessible. In 2020, the Constitutional Court examined the effect of its 2014 decision and regarded it as properly implemented. The use of voting machines was discontinued in 2017 due to its low usage and costliness, but other modes were maintained or newly introduced – voting by post, assisted voting, and voting at home. According to the Constitutional Court these measures are in line with the principle of reasonable accommodation.

The applicants were partially successful. The ECtHR concluded that their right to an effective remedy (Article 13 of the ECHR) was breached (paras. 77–96). However, this blogpost concentrates on the part that relates to accessibility of the polling stations and protection against discrimination. In this regard the applicants were not successful.

The Court affirmed that the lack of positive measures by the state could result in discrimination (para. 111). States have an obligation to treat people differently if their situations are significantly different. The threshold for this obligation to get activated is to suffer a particularly prejudicial impact that is produced by a measure, in this case inaccessible voting process.

Regarding the 2015 referendum, the Court found that the applicants’ respective polling stations were equipped with ramps (para. 118). The accessibility of the rest of the voting process has to be viewed in light of limited state resources (para. 119). In this sense, the Court defended that national authorities are in a better position to carry out such an assessment than an international court. Furthermore, the Court acknowledged that  assistance could be provided to the applicants on the spot by means of reasonable accommodation. Referendums are often organised ad hoc in buildings that otherwise serve other purposes (para. 121). Improvements of accessibility in the built environment may take time. In the meantime, it is necessary for national authorities to carefully respond to the needs of voters with disabilities. In this case, the Court decided that the state fulfilled this duty by installing a ramp (for the first applicant) and arranging a trial visit (for the second applicant). According to the Court the problems that the applicants encountered in the 2015 referendum do not appear to have produced a particularly prejudicial impact on them and did not reach the threshold of discrimination.

In the 2019 European Parliament elections the first applicant did not vote, because he was unable to hold a pen. Voting in secrecy would have only been possible for him by using a voting machine. But, as mentioned earlier, the use of voting machines was discontinued in Slovenia in 2017. The Court held that, in any case, the applicant could have been assisted and that the voting assistant was obliged to respect the secrecy of the voting procedure (para. 125). According to the Court, the use of assistive technologies is one of the means to support people with disabilities in voting, but not a necessary requirement (para. 127). It requires significant financial investment and there is no consensus among the member states whether voting machines should be a requirement for the effective exercise of the voting rights by people with disabilities (para. 128). Again, the Court underlined that national authorities are better fit to evaluate local needs (para. 129). In the past in Slovenia, a very small number of people used voting machines, and they could not assist people with all types of disabilities while implied high costs (para. 130). Therefore, the Court decided that the state has not failed to strike a fair balance between the protection of the interests of the community and respect for the applicant’s rights (para. 131).

Before the Court lays out its reasoning, it introduced the relevant principles for its decision. It talks about prohibition of discrimination, how the ECHR should be interpreted in harmony with the Convention on the Rights of Persons with Disabilities (CRPD), how the Court must have regard to any emerging consensus in contracting states or that applies equally to political life of people with disabilities. First of all, it is necessary to appreciate that the ECtHR concluded that reasonable accommodation applies equally to political life of people with disabilities (para. 114). In the Court’s past case law it was not guaranteed. But overall, in the reasoning the Court does not refer back to the principles, both parts of the judgment seem to be detached from each other and that takes away some persuasiveness.

The influence of the CRPD is not quite visible in the decision. The CRPD explicitly requires the states parties to guarantee to people with disabilities the opportunity to enjoy political rights on an equal basis with others, including accessible voting procedure, facilities, and materials. The Court was content that the state had provided the applicants with the ramps to access the building (and did not comment on the inclination of the ramp in the second applicant’s polling station who had to wait outside for the help of a passer-by). The ECtHR left the evaluation of accessibility of the rest of the voting process to the states, referring to limited financial resources.

Of course, ensuring full accessibility takes time. But in the meantime, the states should provide the voters with reasonable accommodations (see para. 42 of the CRPD Committee’s General Comment No. 6). It is a pity that the Court did not seize the opportunity to assess what reasonable accommodations were available in the polling station during 2015 referendum (e.g. different furniture, change in room layout) and instead adopted the view that assistance on the spot could be considered sufficient. Maybe this is due to some factual ambiguities that persist in the case even after the Court’s assessment (mainly how the applicants voted and what were the exact obstacles they encountered).

Another issue is the secrecy of the vote in the 2019 European Parliament elections. The Court emphasised that according to the ECHR, secrecy must be observed in respect of the voting procedure (Article 3 of Protocol No. 1). But the first applicant would have to disclose his vote to an assisting person. The voting assistant is obliged not to disclose the vote and in the Court’s opinion that is an enough guarantee. Further, the Court relied on the assessment of the Slovenian Constitutional Court that not using voting machines is in line with the Constitution and international obligations. Unfortunately, the ECtHR did not adopt its own view whether the ad hoc provision of a voting machine for example on prior demand would imply a disproportionate burden. While plausible justifications for not providing voting machines as reasonable accommodation could have been given, for instance that it may be too burdensome for the state or that it could compromise the secrecy of the vote even more (the less the votes on voting machines, the more probability to link the vote with the voter), none was given. And without a proper assessment we just do not know.

While the Court’s (regular) argument of national authorities being closer to the situation and being better placed to assess these complex situations is understandable, it is also true that often the wide margin of appreciation guaranteed to Member States may seem excessive. Although there is a clear trend regarding making polling stations completely accessible, the extent to which this duty has been implemented varies among the European countries. Therefore, it could be difficult to set a shared standard. This is clearly an issue that must be addressed in the future given the need to ensure complete accessibility of voting procedures to all persons regardless of their disability. The CRPD committee, equality bodies and national bodies monitoring the CRPD may be of a great help. For example the Czech monitoring body issued a checklist for municipalities to verify that their polling stations are as accessible as possible. Also accessibility of the EP elections should be of concern to the EU institutions, as it is already indicated in the Strategy for the Rights of Persons with Disabilities 2021–2030.

The views on this blog are always the authors’ and they do not necessarily reflect Equinet’s position.